Mustangs and Unicorns - a history of the 359th FG 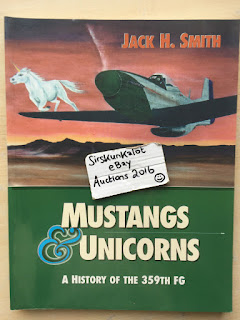 Author Jack Smith and Pictorial Histories Publishing Company produced this excellent, well-illustrated history of the 359th FG in 1997. One of the 8th AF's lesser-known groups, the 359th FG was also one of the last Mighty Eighth groups to enter combat. First flying combat in mid-December 1943, they destroyed 351 e/a in the air and on the ground. They also were prolific train busters. Their efforts earned the Group a DUC. The wartime history of the 359th and that of its postwar successors are comprehensively covered in this well-done volume. Initially equipped with P-47 Thunderbolts, the 359th later re-equipped with P-51 Mustangs. They soon earned a reputation for close escort, their original commander, COL. A. P. Tacon, demanding that Group pilots stay with the bombers rather than chase off after Luftwaffe aircraft. The 359th was the first to use Mustangs in dive-bombing, were the first to down an Me 163 and also were involved in a 'friendly fire' mission wherein Group pilots downed nine Russian Yak fighters! Group aces included John Murphy, George Doersch and Ray Wetmore. Postwar reincarnations of the Group flew P-51s, F-86s, F-84s, F-4s and C-130s. Smith does a workmanlike job of relating the Group's birth and combat history, relating events using a day-by-day format. Though he doesn't use first-person reminiscences or combat reports, he nicely summarizes the air battles and strafing missions flown by the Group and the subsequent postwar activities. A big plus for the book are the hundreds of well-reproduced b&w and color photographs, many of them previously unseen, that run throughout the book. Fighter buffs will undoubtedly enjoy all the shots of pilots, aircraft, air combat scenes, crashes, etc. Unless something better comes along, MUSTANGS and UNICORNS, A HISTORY OF THE 359TH FG will stand as the definitive history of this little-known 8th AF fighter group. 256 page soft cover published 1998

This is recommended aviation book #31 on this blog. You can view the entire list via the label link below
at March 28, 2016 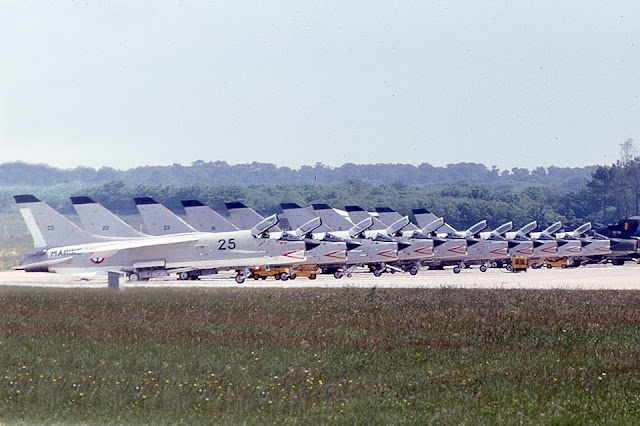 Reposted via Robert Robinson on FB who comments, ".. poor picture quality due to having a Zenit-E as a first camera. They are famous for inconsistent exposure across a frame, hence nearly all mine were brighter on the left hand side. Still, 10 F-8s were always going to make a nice picture I think...I made an effort in the 70's and 80's to do French Open Days as they often had good base flight launches. In this case all the F-8's flew, amazing!"
at March 28, 2016