Rare images of the Arado Ar 232 Tausendfüßler (or "Millipede") on offer here and here at the time of posting. Only a handful of these Transportflugzeuge were constructed. While the original specification called for the aircraft to be powered by two BMW 801 engines these were no longer available by 1941 and four of the less powerful Bramo 323 were selected instead for the 'B' variant. The main feature of the type was the distinctive tricycle undercarriage arrangement; this comprised 'kneeling' main oleos which placed the fuselage closer to the ground, serving to minimise the loading ramp angle via the rear fuselage clamshell doors and a row of small wheels under the fuselage for taxiing on soft or rough fields. During June 1944 test pilot Paul Bader (sic!) had demonstrated the aircraft to Milch and other high ranking Luftwaffe personalities, landing the aircraft on a 'test track' comprising ditches at least 1.5 metres in width and 'embankments' of sand and rubble at least 80 cms high. Note the 'flying dumbo' emblem of 7./Erg TG on the fuselage side just behind the cockpit in the image below..

Email ThisBlogThis!Share to TwitterShare to FacebookShare to Pinterest
Labels: Luftwaffe

.. an Air Britain image in my collection of XV 755 a GR. 1 of No. 1 Squadron and, below, a similarly-marked 'XV 749' from the recent new-tool Airfix 1/72nd scale kit. Aircraft and model are depicted in No. 1 Squadron's initial paint scheme consisting of full colour national insignia - which lasted no more than one week - circa 1971. Airfix don't however provide the unit badge seen atop the fin flash on the real machine..

No. 1 (F) Squadron was of course the world's first operational V/STOL combat aircraft unit when it formed at RAF Wittering on 01 October 1969. Aircraft from the unit flew trials off HMS Ark Royal during 1971. Note the FAA F-4M in the left background of the image below. The F-4 was supposed to be the last fixed-wing type to fly off British carriers, hence the omega symbol painted on the red tail fin, just visible here ..photo also appears in Peter R. March's "The Harrier Story" (The History Press) 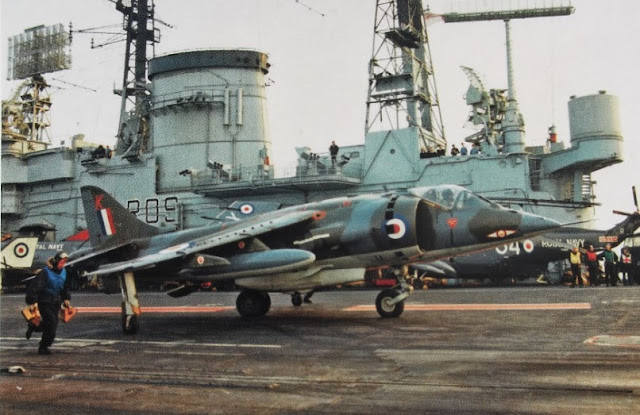 More early Harrier photos via Air Britain - in my collection.
Below;  GR. 1 XV 744 seen presumably somewhere on the flight line at RAF Wittering in the early 1970s.

Below; two images courtesy of publisher Robert Forsyth from Tim McLelland's superlative " Harrier " (Classic/Ian Allan), at 334 full-colour pages the best single-volume treatment of the type....these two views depict No. 1 Squadron machines early in their careers seen at Wittering circa 1970-71, photographs by Steve Bond. It has to be said though that these first service machines were barely out of the prototype or experimental phase - they were 'product ionised' in the jargon and never designed to withstand the daily grind of operational flying. Or at least in the opinion of the ground crews; Steve Bond was Wittering ground crew and recorded;

"..the early Harrier was a pain for the engineers to work on. Engine life between overhauls was extremely short with only limited time allowed for operations in the hover. Replacing the engine meant taking the wing off completely ..and some of the key connections were actually underneath the engine so access was not easy..."

"....we 'lineys' were perpetually semi-grubby because the back-end of the aircraft was so sooty from the engine exhaust.... " 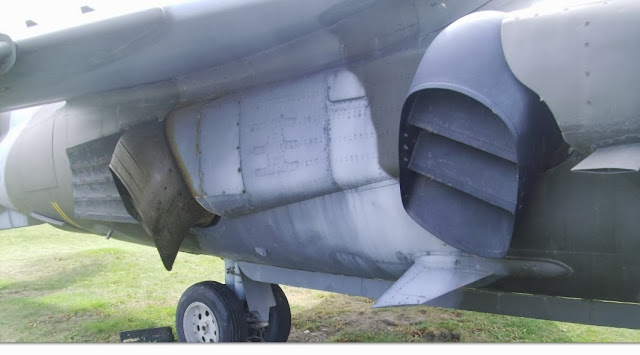 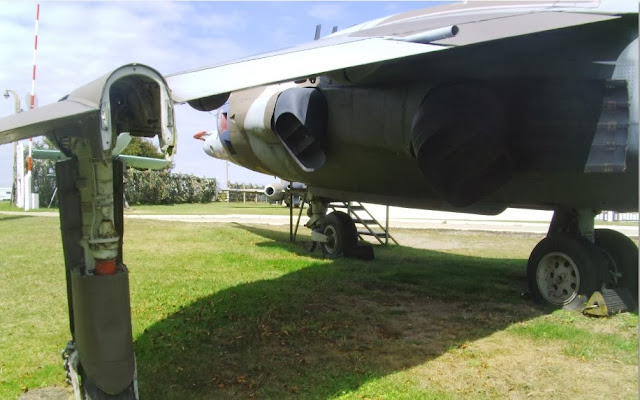 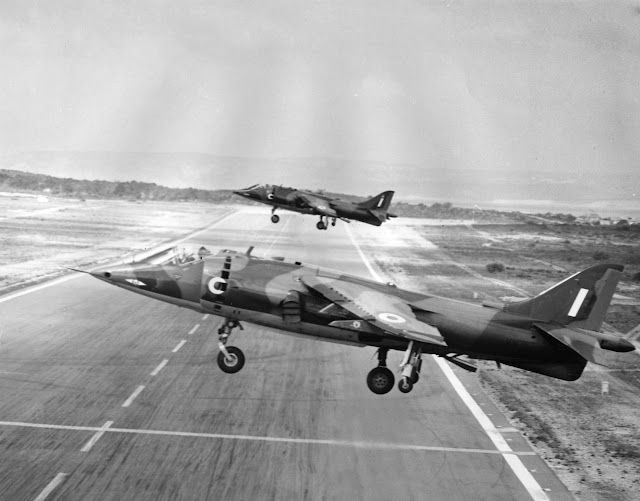