What do the American navy think of the new British aircraft carrier HMS QE II?

The QE class of carriers are a totally different breed from the US Navy super carriers; they are a new concept of carrier.

No catapults - no point in having catapults as their are currently no 5th generation cat -launched aircraft, other than the F35 conventional carrier variant, so why build a new ship to operate obsolete air assets requiring additional, space hungry plant and equipment ( Cats and Arresters), so reducing space for the air-wing and other assets.

They are the first true multi role naval carriers, ideally suited to UK naval policy and doctrine. She is capable of operating a substantial air-wing of F-35B’s, she can act as a pure helicopter carrier operating every type of chopper in the UK inventory including Chinooks and Ospreys, she can carry mixed wings of helicopters and strike aircraft without any modifications, she can carry a full Royal Marine Commando, plus support troops and HQ as standard. In short she is the worlds first Fleet Strike, Helicopter, Support, Assault, General purpose carrier that can fulfill every role currently requiring a host of different platforms. She can do everything the UK needs, from global power projection, intervention, and humanitarian assistance, without any conversion or additional costs.

Much is made of her not being nuclear powered and reliant of fossil fuel replenishment. The biggest new US nuclear carriers still require to be replenished, their nuclear power plants do not provide dry stores or food, aviation fuel or munitions so topping her bunkers up is no big deal. The RN and RFA are well equipped, practiced and experienced at such things. Plus the US carriers ability to cruise for 20+ years between a 4 -5 year long refuel does not diminish the requirements of her conventional escort and supply ships to refuel and replenish from auxiliaries.

The fact the QE class are not nuclear powered, along with her size, is a major advantage. The majority of the UK’s overseas territories do not have huge harbours and many of our allies will not allow nuclear vessels into their ports. There is no point in having a flagship that can’t visit, replenish or be repaired anywhere but at home or in the USA.

Costs alone make the QE class world leaders - two multi role carriers for 3 billion? Manned by a very small crew, future proofed, easy to maintain and no harbour/port limitations. The US could probably build 10–12 of these for every Gerald Ford class carrier they currently plan to build, reflect on that : 1 nuclear carrier with an air-wing of about 75 aircraft, requiring a crew of 4300 men, 10 QE carriers, total air-wing of 700+ aircraft and total crew of 6700 men. What is the most flexible, cost effective “bang for buck” deal? 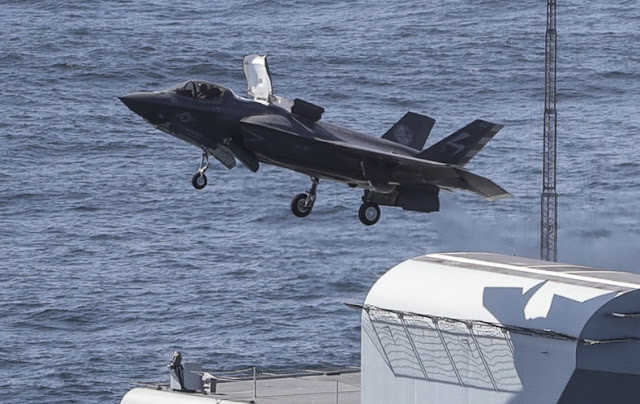 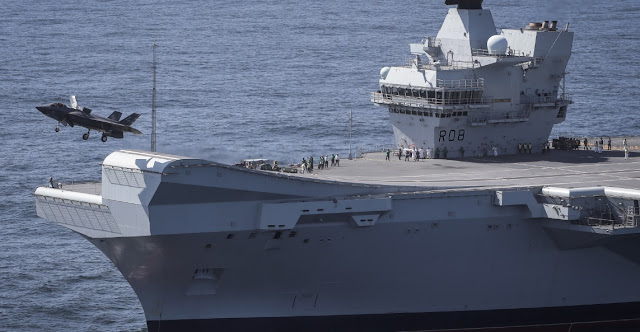 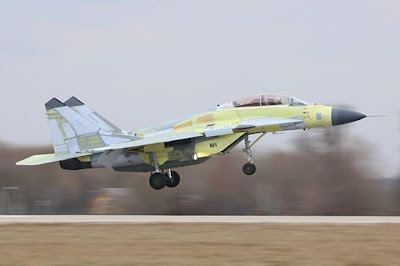 According to Russian site 'Kommersant' Russia and Algeria are holding closed negotiations on the purchase of a squadron of MiG-29 M/M2 jets. The 'M' version is a 'deep modernization' of the MiG-29 with a new radar, air-to-ground and air-to-air missiles, composite materials and more fuel. Apparently the parties are discussing the sale of 14 new aircraft. Algeria is one of the largest buyers of Russian aviation technology and is seeking to replace its MiG-29 S acquired from Belarus and Ukraine. For the MiG corporation, any potential contract will not only make a few hundred million dollars in profit, but will also ensure that its production capacity is busy for several years ahead. The last attempt of Russia to enter the Algerian market with the MiG-29SMT was made in 2006, but the customer, having received the first 15 jets, returned the fighters to the manufacturer because of the presence of sub-standard parts.

Over the past ten years, the Algerian air force was updated with Su-30 MKA fighters (44 units were received under a contract from 2006, 14 - by agreement from 2015), Mi-26 T2 transport helicopters (14 units), training Yak-130 combat aircraft (16 machines). In addition, the Algerian military began to receive combat helicopters Mi-28 NE (42 units were contracted in 2013). According to the expert of the Center for Analysis of Strategies and Technologies, Konstantin Makienko, Algeria’s procurement was promoted by the “NATO intervention in Libya”.. Any Algerian order for the MiG-29 M/M2, coupled with the ongoing supply of 46 such aircraft to Egypt, will allow RSK MiG to load its facilities for several years in advance stated one quoted by 'Kommersant'. “Against the background of the Russian military’s plans to purchase the MiG-35 ( in 2018–2023, 6 machines will be delivered to the troops) this order will be a good help for the corporation. ” In addition to the “MiG” products, Algeria is also looking at other aircraft technology: in particular, the Su-32 bomber and the Su-35 multipurpose heavy fighter. In February 2016, the Su-35S, assigned to the 159th Guards Fighter Aviation Regiment of the 105th Mixed Aviation Division of the 6th Army Air Force and Air Defense of the Western Military District, flew to the Algerian proving ground Tamanrasset for demonstration flights. However no contract was forthcoming.
at November 26, 2018

Best known for their iconic, in-depth auto repair manuals, Haynes of Somerset, England, also offers a series of books which delve into the design, construction, and operation of famous military aircraft. Their titles on the Spitfire, Mosquito, Typhoon, Grumman F-14 Tomcat and the Lockheed SR-71 Blackbird are all available cheaply at the time of writing in British high street discount retailer 'The Works'. And when I say 'cheaply' - I mean 'cheaply'!

The familiar red and yellow Haynes logo on the front of the company’s hardback books has been around for more than 50 years. The Somerset-based company still makes a lot of money on a format that is relatively unchanged since it first appeared. With a live catalogue of more than 1,700 manuals, the company has a presence in 80 countries and 24 languages. Few people could realistically expect to take apart a Spitfire, for which the company produced a manual when it became official publisher to the RAF in 2007 but the company line still applies; “It is a manual, not a coffee table book that happens to contain technical instruction. Well, maybe it’s a combination. You are not going to go out and repair a Spitfire, obviously, but you could with this. It retains that trusted explanation." The Spitfire volume is just one of a hugely successful line of similar publications from the Haynes stable.Equipped with them you could feasibly service Lancaster or Vulcan bombers, Concorde or Apollo 11, to name a few. The aviation titles in the Haynes range are mostly excellent. And now more than ever these manuals are available in retail outlets all over Britain at discounted prices - many aviation titles can be purchased in 'The Works' for just £6. Although these are not discounted books.

According to Haynes Commissioning Editor Jonathan Falconer posting in the FB Aviation Book Enthusiast page they are special print-runs produced exclusively for 'The Works'. Falconer himself however is apparently not a 'fan', believing that they undermine future book production and diminish the 'rewards' available to authors. His friend Lee Howard, who compiled Haynes' Lynx and Wessex manuals which are also available cheaply in 'The Works' (currently only £6 per hardback volume) agrees with him. ....aahh..

To be honest, though - and let's do a bit of straight talking here - I don't know what Jonathan Falconer's problem is. He presumably still gets his salary/contract payment whomever the Haynes Manuals are printed for and at whatever price point they are sold at. Most print runs these days are either Singapore, Hong Kong, mainland China or Taiwan and this has been the case for a long time. It must be certainly a big factor in Haynes profit margins (£3 million in 2017 on revenues of £30 million), it's been like that for decades, so one assumes Haynes still makes money on these titles - the 'Buccaneer' book produced by Keith Wilson (yes, at the time of writing available for just £6 in 'The Works') was only released in August 2018. These sort of discounts do probably pose a threat to the independent book retailers, who, even as a collective, do not have the buying power to order the numbers and thereby get the discount that 'The Works' gets.

According to one insider, who worked in book sales for ten years, " ..my understanding is the print runs of the Haynes titles that 'The Works' order are around the 20,000 copies mark, that's a massive inducement to ANY company..." 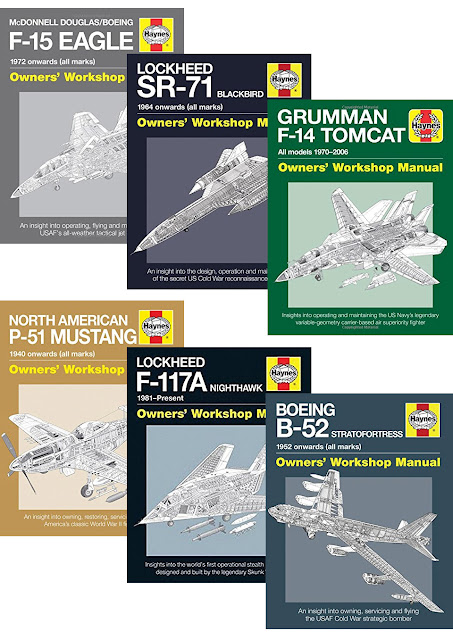 also on this blog;

UK aviation magazines - why does Key Publishing (have to) own everything ? https://falkeeinsgreatplanes.blogspot.com/2015/03/uk-aviation-magazines-currently-on.html
at November 25, 2018

" ..it has been hard work, especially as the Sea Vixen is a very large and very heavy aircraft.." 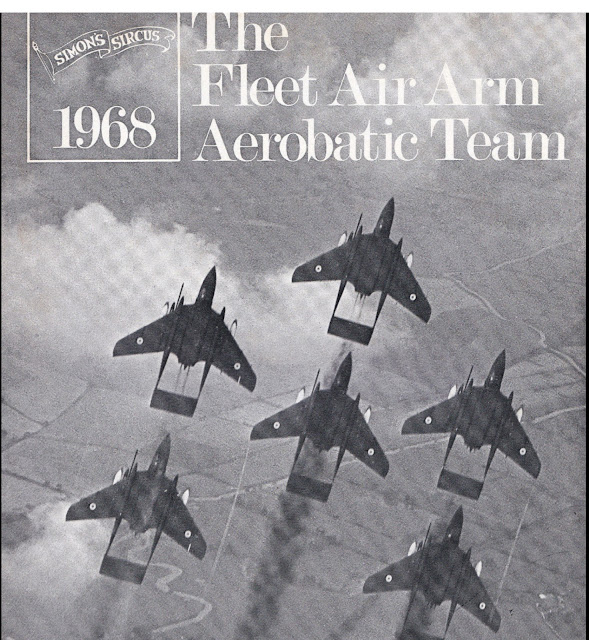 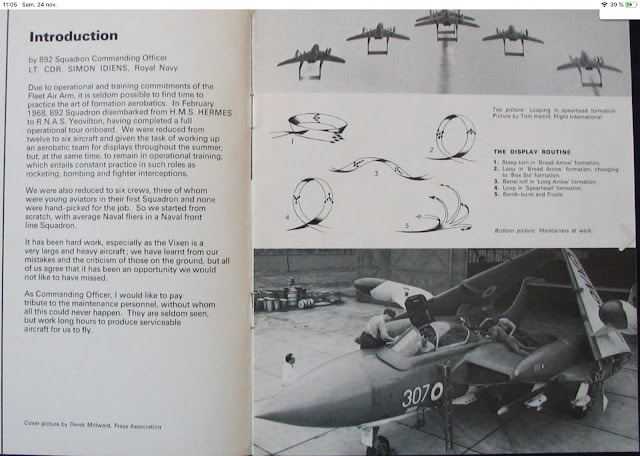 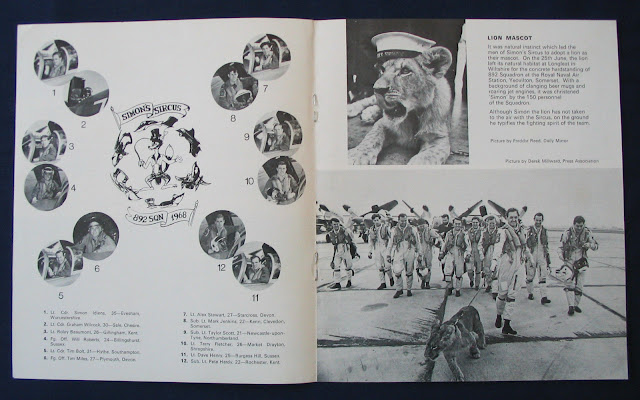 892 Sqd CO and 'Simon' of "Simon's Sircus" Sea Vixen aerobatic display team fame was Lt. Cdr Simon Idiens. Idiens was later killed after ejecting from Phantom FG.1 XT876 off Trevose Head, Cornwall on 10 Jan 1972. He was step-father of actress Kristen Scott-Thomas, who's father Lt Cdr Simon Scott-Thomas had been killed in 1966 in a 893 Sqn Sea Vixen crash.
at November 24, 2018